October 04, 2020
The News tsunami is now passing on this crucial story of vast importance to Canadians, Ruth Bader Ginsburg died on September 19, 2020; and with this news, the Canadian press mourned (SNH). Why? Well ... um ... because ... maybe um ... maybe it was because she was the 2nd or 3rd woman on the Supreme Court (?): Not on Canada’s Supreme Court mind you, she was on the Supreme Court of another country. You see, Canadians don't actually know what their judge's names are, or what colour their eyes are, or if they wear boxers or briefs. And honestly, why would we? So why does the CBC think we should be innodated with a foreign judge's demise?


And yet, for weeks I couldn’t scroll through a dozen Canadian news feeds without article after article bemoaning the passing of an American judge. When I keenly examined the CBC website, Ruth, or Saint Ruth, which is their pet name for her, featured prominently on virtually every page for over a bloody week!

If Canada’s private media companies wish to report on this, that is their prerogative, albeit as pathetic as that may be. But when the Canadian State broadcaster glows affectionately for weeks over obscure individuals that have no relevance to Canadians, that is odd, to say the least. For the CBC is not CNN, or MSNBC, or even ABC: it isn’t supposed to be obsessed with American news. Sure, it should report on relevant international news, perhaps with a skewing towards Americana news, given our proximity; but something odd has happened at the CBC over the last decade or so. They report on American News to the detriment of Canadian News. When I checked their feed last, there were actually more stories about a foreign President than our Canadian Prime Minister: And this is the Canadian State-run broadcaster! And as mind-boggling as this is, upon my last survey, there were over twice as many stories on the defunct Russian Collusion ruse in the Trump presidency than on Trudeaus’s 3 ethics probes (and their criminal implications). Combined!! It’s almost as if the CBC uses American content to distract Canadians away from Canadian Trudeaudian scandals. It’s almost as if the CBC’s hatred of American Republicism has poisoned their minds to the point of obsession: reducing the once-proud Canadian State-owned Broadcaster to a creepy stalker trying to hurt their orange-haired ex.

And besides their irrational feral obsession with being a motivator in American political discourse, there seems to be a deep-seated ignorance in their reporting. There are times when you can actually feel your IQ decreasing as you watch the CBC’s political analysis. As I mentioned, in the rainstorm of drippy news stories on St. Ruth’s death, a truly Canuk relevant story was swamped in the Ruthian deluge, and it wasn’t until a week later that I saw that our past Prime Minister Turner had died. His passing was apparently only a measly drip in the Ginsburg flooding, and easily missed. I learnt of Turner's passing with this Canadian Press feed: view press picture below.

And this picture is an excellent summation to the point that I am trying to make. That is not a picture of the late Prime Minister John Turner. It is a picture of former Prime Minister Brian Mulroney. Sigh. It is as I said, you can feel yourself growing dumber by watching the Canadian Press and their head-master, the CBC. 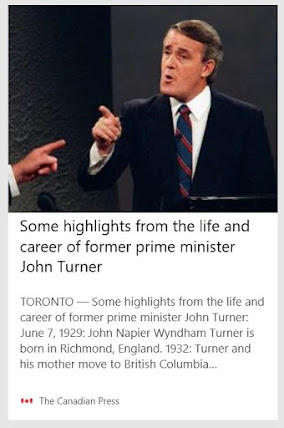