Said the rich kid with an inherited trust and a drama degree.

2. “There’s a level of admiration I actually have for China because their basic dictatorship is allowing them to actually turn their economy around on a dime’”

He actually said this while wearing yellow face and squinting his eyes.

So we win by dying? It's kind of like his economic policy. So at least he's consistent: consistently stupid, but consistent.

4. Justin Trudeau promises to grow the economy 'from the heart outwards'

Apparently raising my taxes and taking my money is dear to Justine's heart.

5. “Deficits are a measure of growth and success that a government is able to create”

And all the economists scratched their heads with a perplexed look on their face.

6. Trudeau said the government should not call honour killings "barbaric"

It makes you wonder what word he would have chosen? Mean? Not nice? Or perhaps he meant it in the other direction: Honorable?

7. “Gender equality is not only an issue for women”

And all the feminists scratched their heads with a perplexed look on their face.

8. We like to say peoplekind, not necessarily mankind. It’s more inclusive

9. When Trudeau sexually assaulted a reporter by grabbing her breasts and squeezing them, he said, “I’m sorry, if I had known you were reporting for a national paper, I would never have been so forward”

Translation: I try to only sexually assault women that can't defend themselves.

10. On Dictator Castro’s death, “"While a controversial figure, both Mr. Castro's supporters and detractors recognized his tremendous dedication and love for the Cuban people who had a deep and lasting affection for 'el Comandante'." And he ends by saying his dad "was very proud to call him a friend."

No Justine, a baby is not a scientist, it's a baby. It seems odd that I have to explain this to him. 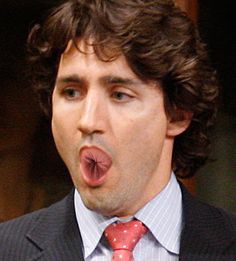